Union Pacific Steam Locomotive No. 844 was the last steam locomotive built for Union Pacific and was finished in 1944. It was a high speed engine for passenger trains with a maximum speed of 120 mph.  Retired in the late 1950s, it was saved from scrapping in 1960 and scheduled for restoration.  Now used mostly for excursion runs in Wyoming it has become an ambassador of goodwill for Union Pacific. Hailed as Union Pacific's "Living Legend" the engine is very well known among railroad enthusiasts.

Earlier this month UP844 traveled outside of Wyoming on a run to Boise Idaho and rolled through Idaho and Utah before heading back to Wyoming. My husband and I caught up with it in the small town of Shoshone Idaho and then followed it East to another small Idaho town, Minidoka.  Impressively large crowds, for these small communities, turned out to get a look at this unique locomotive at each stop.  Kids of all ages, children to senior citizens, lined the scheduled route to cheer and waive as it rolled by, sometimes reaching speeds upwards of 70 mph, while blowing its horn - that great whistle sounding horn so distinctive of a steam engine. Young or older there's a giddiness that overcomes people when they see a train that makes events like this really fun.

It was really cold, windy, and humid on the day we went to see UP844 so the steam could be seen for miles which only added to the anticipation of being able to see something so historic - not in a museum but rolling through the countryside like it once did decades ago. Pulled by the locomotive on this trip was its tender, six other cars, and a Diesel locomotive used to assist it on steep grades.  It was an amazing thing to see.

Waiting near the train depot in Shoshone took me back to my childhood.  I traveled by trains a number of times with my Mom, and sometimes my older sister, across the country to visit family when my Father could not get leave from the Army. Riding trains are some of my most vivid and best memories. It was a time when train travel was quickly giving way to airlines but still less expensive. It's possible that my Mom's memory of traveling by train as an adult is not as exciting as mine is. I remember it as a time of meeting interesting people and seeing wonderful landscapes. I remember waiting for long turns in the track so I could count the number of cars between me and the locomotive and marveling that something that seemed so far away and relatively small could be powerful enough to pull all of those cars. It was a slower time and slower way to see America. It felt like a privilege and an adventure to travel by train. There was a feeling of patriotism to journey through the vast countrysides of this big country we Americans call home. Each trip was an exciting adventure.

So as I stood there waiting in Shoshone Idaho. I had visions of a small child holding her Mom's hand waiting for the train that would be the vehicle for the next journey.

And soon we could hear that whistling sound like the title to Paul Simon's song a "Train in the Distance" headed our way.

I was standing very near the tracks as UP844 rolled into Shoshone. It was loud. The engine is loud. The weight of it rolling on the track is loud. That whistling horn is loud. The sight of the steam pouring out of it in the cold was amazing.  As it rolled by me the steam warmed me but was too overwhelming to stay close to the tracks. The breeze made from the rolling powerful large wheels was an impressive burst as well.  As it rolled by all of the photographers lined up to get photos the same utterance could be heard - simply "WOW".  It's a beautifully impressive powerful old locomotive. It seems as if it really is a "'Living' Legend".

Its time in Shoshone was short so we decided to follow it over to its next stop so we could get ahead of it and take more photos.  It was a great day and photo outing. It was another memory to add to the great train memories already stored in my mind. Paul Simon is right. There is something romantic and nostalgic and hopeful about the sound of train and everybody thinks it's true.

Thanks UP844! Thanks for stopping by!

Go to the UP844 gallery HERE to view more and purchase photos. 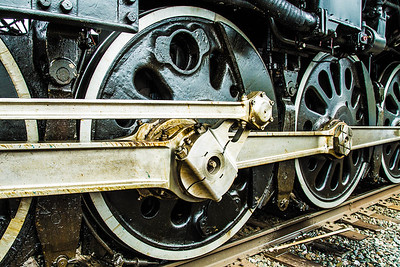 The massive 80 inch diameter driving wheels of UP844.

A passenger-observation car with UP844.

A veteran reaches to untangle Old Glory on UP844. 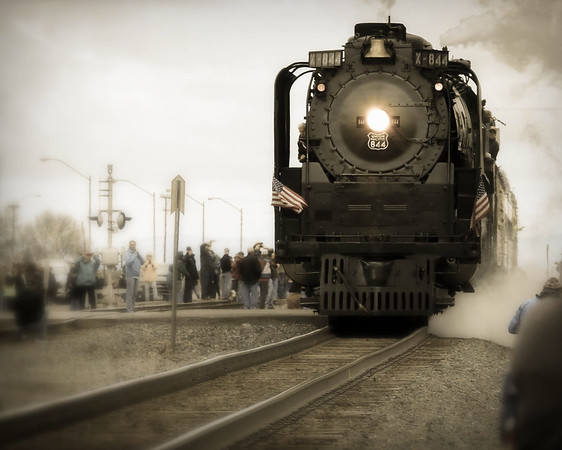 UP844 pulls away from the Shoshone ID Train Depot.

UP844 rolling along the Idaho countryside.

Thanks to Union Pacific and the UP844 crew!